On Friday, November 17th NeighborWorks Blackstone River Valley, the Town of Burrillville, and their funding partners officially cut the ribbon at Greenridge Commons signifying the opening of a new community of affordable rental homes in Pascoag.

The idea for Greenridge Commons has been on the drawing board for over 15 years ago. In 2002 Joe Garlick, Executive Director of NeighborWorks Blackstone River Valley, took a walk through the site and began to dream what could be possible with 200 acre plot of land. Plans were drawn up for a 31 building neighborhood of homes that stay true to Pascoag’s charming architecture and history and provide safe, clean affordable housing for 75 families. In Summer 2016, NWBRV broke ground on the project, and as of today 11 of the buildings are complete and 26 families get to call Greenridge Commons their new home. Two additional buildings are being developed on Pascoag’s historic main street. These buildings will host an additional 21 units, bringing a total of 96 affordable homes to Pascoag by the time the project is complete.

Renee Seddon is the mom of one of these families. Originally from Glocester, she had been living in North Providence in a lead-ridden apartment unsafe for her four children. Wanting to raise her kids in an environment like the one she grew up in, she’s very happy to be living at Greenridge. She shares that “the kids are settling in and we love our new home here in Pascoag.”

With a mission to expand affordable housing options throughout Northern Rhode Island, there are many communities that NWBRV could have worked in, however Joe Garlick, Executive Director states that “We had a great partner in the town who supported the project in a big way!” he goes on to state that “once the project is completed they are going to exceed their 10% affordable housing goal.” 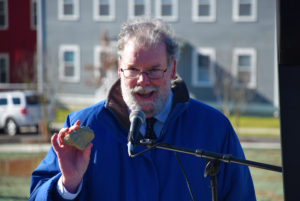 The ceremony opened by NWBRV’s Executive Director Joe Garlick holding up a gold painted piece of ledge and stating “affordable housing is like gold, it’s rare, hard to get, and once its developed, it’s priceless.” While digging through ledge may have been a challenge to the development team at one point, it didn’t keep the crew from moving forward and developing stunning homes at the intersection of Route 100 and Lapham Farm Road in Pascoag, RI. Garlick and his team truly worked to turn ledge into something that’s just as precious as gold for the 75 families who will soon call Greenridge Commons home.

Garlick was followed by Mike Woods offering greetings from the Town of Burrillville “it wasn’t until Joe came here that this parcel of land was developed into a community,” Bill Hatfield of Bank of America, “I can’t tell you how proud we are of this project and the small part we can play in creating a more vibrant community here in Pascoag,” Barbara Fields of Rhode Island Housing “This is what makes a difference. I want to thank the team for their perseverance, it truly takes a village to make this happen,” Mike Comiskey of Citizens Bank “this meets the 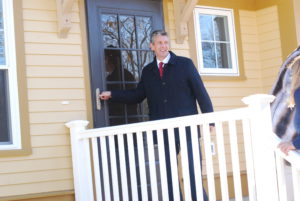 critical need for affordable housing and we’re proud to be a part of this project,” Mike Tondra of Rhode Island Office of Housing and Community Development “projects like this are breaking down the negative perception of affordable housing. We’re building neighborhoods,” and Carrie Zaslow of LISC Rhode Island “NeighborWorks is committed to building neighborhoods where all of the residents are able to thrive and connect with the local economy.”

The brief ceremony concluded with Garlick offering each partner a piece of “gold” to serve as a paper weight and constant reminder of the importance of investing in projects like these.

Garlick states, “There is a great need for affordable housing throughout Rhode Island. For this project alone we have a waiting list of over 400 people for 96 units.”

The total development cost for this 96 unit complex, coupled with over ten thousand square feet of commercial/community space, equates to $28.5 million dollars – with 88% of the funding derived from private/equity sources, 7% from State/Local sources and the remaining 5% from Federal sources. 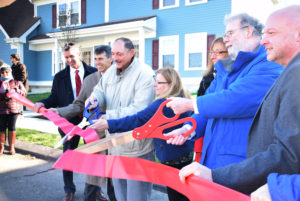