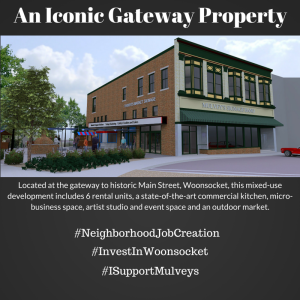 We are pleased to announce that work has finally begun on 40 South Main Street in Woonsocket at the site of the former Mulvey’s Hardware Store.  We are currently in the demolition stage which includes shoring the property, environmental remediation, and the removal of hazards such as lead and asbestos.

The epitome of Main Street redevelopment best practices, the gateway project will create a hub of activity for the Downtown commercial district including:

NWBRV is working with local construction company, Nationwide Construction, on the project, which will employ about 25 people throughout the construction project.  Additional jobs and spin-off spending will also contribute to the local economy upon project completion.

With demolition kicking off, the project has been featured in both the Valley Breeze and Woonsocket Call in April.