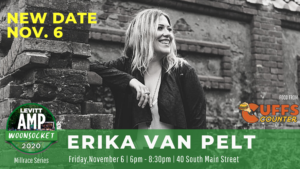 Join us for some live music IN PERSON from Erika Van Pelt top it off with some delicious food for purchase from CUFFS Counter!

ABOUT Erika Van Pelt
When Erika Van Pelt released her debut album “My Independence” in the fall of 2013, it began another chapter in her solo career. Drawing influence from a myriad of different artists, Van Pelt has done what many artists are afraid of doing, creating a record that breaks down the boundaries of genre-specific songs and allowing herself to express her deep appreciation of soul, rock, blues, funk, pop, indie, and even hip-hop.

When Erika was only 7, she began her singing career like many others, in a church choir. She became very comfortable singing in front of large audiences and she quickly nurtured her connection to the music.

Her love of singing continued to grow through her teenage years, and she disciplined herself in studies of jazz, contemporary, and classical. This earned her first place at the state level all 4 years of high school. She also received recognition at the regional and national level for her involvement in chorale.

When she turned 17, Erika earned the Judge’s Choice Award at the Berklee Jazz Festival in Boston, MA, encouraging her to attend the following year and further her studies. She spent only one year at Berklee College of Music studying both Production & Engineering, and Vocal Performance. She left Boston and returned to her home state of Rhode Island, hell bent on beginning a music career.

In 2003, she launched Van Pelt Entertainment, a full service mobile DJ service, which has recently expanded to house several bands, Erika’s independent record label EVP Records, and even a publishing company, all under one umbrella.

In 2011, Erika’s ambition led her to the Pittsburgh auditions for the eleventh season of American Idol. She escaped elimination after elimination, fighting all the way into the Top 10. She has been called one of the season’s “most underrated” contestants, and her talent and passion were highlighted on the season’s international American Idols LIVE! Tour 2012. Erika performed many songs, but her triumphant moment, a “not to be missed standout” (Hollywood Reporter) was her cover of P!nk’s “Glitter In the Air”. The song meant so much to her, that she produced her own arrangement of the lesser known tune on her debut album, dedicating the cover to her Idol journey. When asked about making the record, Van Pelt said “As soon as I got back from the Philippines, I had a talk with myself. [I thought]: “You can go one or two ways, Erika — you can be the stagnant pool on the edge of the rolling river or you can get rocking and rolling. I feel like no one who has ever been successful has done it by standing by and watching things happen. I like to be proactive. I don’t like to just talk about things. I am a doer.” That’s exactly what she did.
www.erikavanpelt.com