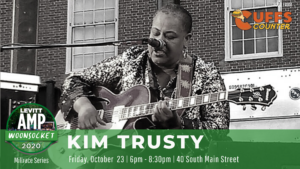 Join us for some live music IN PERSON from Kim Trusty top it off with some delicious food for purchase from CUFFS Counter!

ABOUT Kim Trusty
Km Trusty hails from Media, decades residing in Providence Rhode Island refining her musical skills, crafting and branding her own style of Jazz, R&B, Blues and original music. Trusty’s reputation has moved well beyond the Ocean State as a consummate technician, vocalist, lyricist and songstress.

There are the inevitable comparisons to the women who have set the standard in this genre – Ella Fitzgerald, Anita Baker, Etta James, Joan Armatrading to name just a few. To say that she is more than the sum of theses parts is an understatement. Trusty has had the privilege to work with some of the industries best, Paula Cole, Richie Havens, Rick Danko among others.

She is also known for her work in the community. Trusty has worked with kids from diverse backgrounds, teaching elementary school music, primarily working with African Americans and Latinos. She helped start Providence’s first school for the Arts Trinity Academy for the Performing Arts which opened it’s doors in September of 2010.
The following year, Trusty was asked to sing the National Anthem at Governor Lincoln Chafee’s inauguration. She has performed as an actress playing the role of Rosie in When Mahalia Sings from 2010-2012. In 2013 Trusty also recieved a grant to help develop her show Lady Fingers. Lady Fingers is a show about African American women guitar players. She currently is working with a screenwriter to tell her amazing story as a black lesbian artist, educator, stroke and cancer survivor.

Trusty draws on Jazz, Rhythm & Blues, Vocal Improvisation, Soul and Roots, bringing her life, heart and work experiences into unforgettable and unique performances. Her talent, presence and warmth combine to invariably bring an audience to its feet time and again and develop community whether in the classroom or on the stage.

Trusty’s depth of talent transcends customary expectations, whether performing with a guitar, piano or a full band. Her voice wraps up the listener in sultry surround sound from the first note and instantly makes it clear that there’s nothing better than full immersion in the Kim Trusty Music vibe.