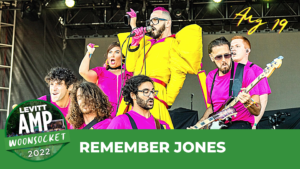 Join us at beautiful River Island Art Park in downtown Woonsocket for the final FREE concert for the Levitt AMP Woonsocket Music Series.

Remember Jones is a one-of-a-kind soul/pop singer, storyteller and bandleader with a throwback vibe and authentic energy. Often backed and supported by a large ensemble of musicians, his original music and creative, theatrical events have played to countless packed and sold-out clubs and theaters throughout the United States.

Born and raised in Providence Rhode Island to musical parents, Alexus Lee expressed early aspirations for a career in music. Her journey began with Piano, Violin, and Voice, the latter of which quickly became her primary love. After years of study, one will see that Alexus has truly developed a mastery of her instrument, holding an impressive 4 octave range. That, along with her skillful ability for storytelling, and commanding stage presence, have carried her to countless cities, states, and countries around the world. After graduating from Berklee College of Music one year ahead of schedule, Alexus has dedicated herself to writing and performing, honing her abilities, exploring new instruments, and preparing the world for her debut album. “I want listeners to leave my shows feeling good. Feeling inspired, feeling changed in some way for the better.” Said Alexus about what she hopes listeners will take from her performances. “Above all I hope the messages of love and authenticity shine through. It took me a long time to love myself and to let myself be exactly who I am. I hope to inspire as many people as I can to be more themselves; to love, value, and cherish themselves and in turn others.”