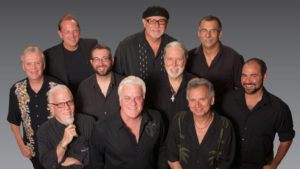 Join us at beautiful River Island Art Park in downtown Woonsocket for 4th of 10 FREE concerts for the Levitt AMP Woonsocket Music Series. Concerts will continue every Friday from June 14-August 23 (skipping July 5).

July 12th features RI Legends Steve Smith and the Naked Truth with opening act O.B. Howard. The evening will offer special recognition for Rotary International members from across Rhode Island. Thank you for your good work!

ABOUT STEVE SMITH AND THE NAKED TRUTH
This ten-man blues-rock band and traveling party machine consists of a four-piece rhythm section, a five-piece brass section, and charismatic lead vocalist Steve Smith. The veteran R.I.,-native musicians have been thrilling audiences and making studio recordings together for more than 45 years.

Their distinctive blend of rhythm, brass, and joyous enthusiasm has garnered them loyal fans across the country. They’ve toured and shared the stage with renowned artists including Bruce Springsteen’s legendary saxophonist Clarence Clemons, for a series of critically acclaimed performances. They’ve also been featured on television numerous times, appearing on MTV’s video countdown program, The Basement Tapes, and more recently, on an episode of popular animated sitcom Family Guy. The band was inducted into the Rhode Island Music Hall of Fame in 2013, and they show no signs of slowing down anytime soon.

ABOUT OB HOWARD
O.B. Howard is an indie duo from Providence, RI. The influence of multiple genres and generations of music is evident in their eclectic music.

“The Levitt AMP Woonsocket Music Series is supported in part by the Mortimer & Mimi Levitt Foundation, a private foundation that empowers towns and cities across America to transform underused public spaces into thriving destinations through the power of free, live music. Learn more at levitt.org.