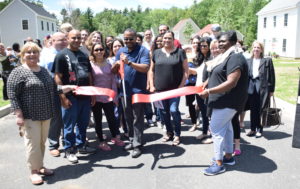 On June 4th, a crowd of workers, donors, interns, new homeowners and their families gathered in the middle of George Eddy Drive in Pascoag, Rhode Island for a ribbon cutting and to celebrate an accomplishment much bigger than themselves. Over the past year, this group of eight families worked exceptionally hard at building a new neighborhood through the USDA’s Mutual Self-Help Housing Program, while also building a community and to a degree, an extended family.

As project supporters took to the podium to speak throughout the afternoon two themes took center stage: community and belief. The idea of community becomes clearer once we understand the full context around Fernwood. Usually when we think of ‘neighborhood gatherings’ we think of cookouts or parties. But Fernwood is different. These families built their homes from the ground up together. They enjoyed some high peaks and had to fight through some low valleys together. This community is cut from a completely different fabric. Daynah Williams, NeighborWorks Self-Help Housing Manager, was first to stress that this is a community, not a development, but I would take it a step further. This is a family.

To achieve a feat like this takes a different breed of visionary. Jeanne Cola, Executive Director of LISC RI recalled a recent time when the neighborhood was “nothing but dirt and dust,” speaking to how far these families have come in just one short year. Jeff Cascione of Navigant Credit Union also recalled his skepticism at first hearing the proposal. However, like Cola he expressed amazement in the accomplishment of these families, calling it “a perfect example of people and neighbors coming together,” once again harkening back to the collective hard work and perseverance of the eight families.

In the end, ground was broken on phase three of the Fernwood Self-Help Housing Program. Eight more families will spend one full year working together toward a common goal of homeownership. The Ribbon Cutting at Fernwood kicked off NWBRV’s participation in NeighborWorks Week , a national initiative of NeighborWorks America that brings together volunteers, businesspeople, neighbors, friends, and local and national elected leaders for a week of neighborhood change and awareness.