Things are cooking in Woonsocket! On Saturday June 3rd, NeighborWorks Blackstone River Valley formally opened their kitchen incubator with a ribbon cutting ceremony at 40 S. Main Street. The kitchen is now available to local food entrepreneurs interested in starting their own business. 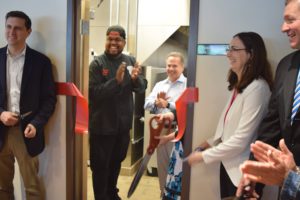 At Saturday’s ceremony, community members and local leaders came together to celebrate the kitchen. Congressman David Cicilline applauded the project because it can help people “show their talents and start a new business.” Treasurer Seth Magaziner also supported the project and the food entrepreneurs: “We believe in you, we want you to succeed… we have to support up-and-coming mainstream businesses.”

Chef Roscoe Gay will gladly share about the kitchen and growth of his business. A few years ago, Roscoe was not happy with his job at CVS. Then, a friend suggested he continue his love of cooking, and so Roscoe began practicing his cooking and baking skills. After that, Roscoe built his business, Every1s Chef, by posting his creations to Facebook and sharing his food with friends. He also worked at NWBRV’s Youth Center, which made the kitchen a natural fit to help grow his business. Roscoe says that, “like a jigsaw puzzle, all the pieces came together.”

Eve Keobounthanh, another future kitchen member and food entrepreneur, will use the kitchen for her business, Jeow by Eve K. On Saturday, Eve spoke to the crowd and said she is “so excited to be working out of the incubator… to meet people who want to see you succeed is inspiring.”

Lynne Peterson from NeighborWorks America ended the afternoon with excitement. “A lot of creativity and innovation is happening right here in Rhode Island.” 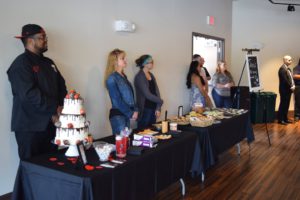 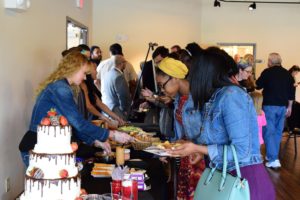 The event finished with food samples from future kitchen members, including Roscoe and Eve, as well as Rustic Roots Baking and Sue’s Cajunaise.

For an inside look at the kitchen, check out this video

Interested in starting their own food business, check out our site or contact Tamara Burman (tburman@neighborworksbrv.org), the Health, Business, and Cultural Activator for 40 South Main.

Saturday’s events kicked off the 2017 NeighborWorks Week (June 3-10), during which NWBRV and other NeighborWorks organizations across the country supported tens of thousands of residents, business people and government officials in a week of neighborhood change and awareness.

Richelle Hurley joins us from Villanova University as a Communications and Grant writing Intern. Richelle just finished her Bachelor’s Degree in Communication, and is now getting her Master’s Degree in the same field. She loves all things Communication, non-profits, and Rhode Island. She looks forward to spending the summer learning and working with NWBRV!