What better way to spend February Vacation than by taking a trip through time? Well that’s just what the youth from Greenridge Commons did. Through a partnership with Woonsocket’s Museum of Work and Culture, students got to experience life in Woonsocket in the 19th and 20th centuries.

The Museum is dedicated to ensuring access for all, especially young people in our community. We believe that by providing an engaging and educational look at our history and how it was shaped by the people who lived here, we can empower students and let them see the role they can play in shaping our future. – Sarah Carr, Assistant Director of the Museum of Work and Culture. 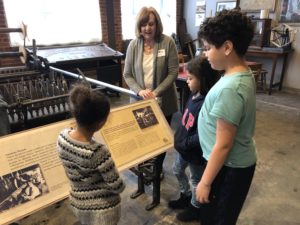 The educational journey back to the 1800s began in an authentic Canadian farmhouse. Here, the students learned about Woonsocket’s French and French-Canadian ethnic heritage. They expl  ored the day-to-day of a Woonsocket mill worker; from Sunday worship, to the Catholic school classroom, to leisure activities such as baseball and checkers. Many of the kids reflected that life back then was in fact very similar to their own lives today.

I’m glad that now, in the future, I don’t have to do the same job every day all day like they did back then. But it’s cool that they did some of the same things we do now, like play checkers.” – Ramses, Grade 3

Students heard about Woonsocket’s legacy as a historic mill town and its most prominent industry, textiles. They were shocked to learn that kids worked long, grueling days in the mills before child labor laws were passed.

I thought it was interesting that some people lived and worked on farms in Canada and some people came to Woonsocket to work in a mill instead. In the mill, if you needed a break your boss might not give you one. They worked long days and had to do whatever their boss wanted. At least on the farm, they got to be with their families and could take breaks if they wanted to. I don’t want to do either, but if I had to, I’d choose the farm.” – Camil, Grade 1 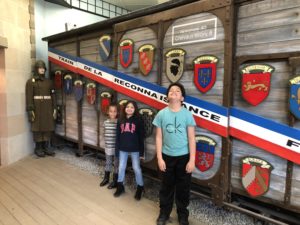 After learning what life was like as a mill worker, the kids got the chance to make their own textile creations, learning to weave fabrics to create different items.

The last stop on the Museum tour was to the ‘Merci Train’ or ‘Thank You Train,’ a gift from the French government to the City of Woonsocket after the Second World War. The Merci Train gave the students a new perspective about world geography – they were shocked to learn France does not have States like the USA, and instead has provinces, represented by the colorful crests hanging along the train car.

During the self-guided portion of the museum trip, students rushed to the touch-screen map of Woonsocket on the second floor of the museum. Students were excited to finally use some modern technology they have become so used to!

The Museum trip provided a break from our regular programming dive deep into the past. It was great to see the kids learning in an interactive environment about history; I could see the wheels turning in their minds throughout the tour. The interactive element kept the students actively engaged in the learning process, as they asked questions and were challenged to think about life from a different perspective. Since the trip, we have kept an open dialogue about Woonsocket’s history, hoping to broaden students’ interest in history and culture. – Katie, Greenridge Commons Site Coordinator

NWBRV’s youth programs in both Burrillville and Woonsocket are currently enrolling students for grades K-5. The programs run from 3:30 pm – 6:30 pm after-school and all day during April and Summer vacations. For more information e-mail maustin@nwbrv.org