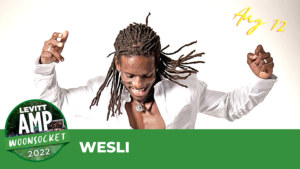 Join us at beautiful River Island Art Park in downtown Woonsocket for the 9th of 10 FREE concerts for the Levitt AMP Woonsocket Music Series. Concerts will continue every Friday from June 17 – August 19.

Wesli’s musical journey has gone from stringing up an oil can with nylon fishing line to winning a Juno for World Music Album of the Year.

Born Wesley Louissaint in Port-au-Prince, Haiti, he has grown into his role as a prolific songwriter, guitarist and producer. Uniting a large cross section of Montreal talent, his music links Haitian voudou and rara with roots, Afrobeat, and hip-hop. Guest spots on his albums include the likes of Tiken Jah Fakoly, Paul Cargnello, and Malika Tirolien. He has toured under the GlobalFest banner with the Caribbean All Stars.

Since being crowned the Revelation Radio-Canada for 2009–2010, Wesli has gone on to win the Babel Med Music Prize (2010), SOCAN’s Hagood Hardy Award (2016), an award from the Académie Charles CROS (2019), a Juno for World Music (2019), a Félix for Album of the Year in World Music (2019), and a CFMA for World Solo Artist of the Year (2020). He has toured across North America, Haiti, Colombia, Brazil, and Europe, and participated in WOMEX, Mundial Montréal and Cape Verde’s Atlantic Music Expo.

Wesli’s unstoppable creativity led to two album releases in 2015: the star-studded Immigrand alongside the more traditional Ayiti Étoile Nouvelle. Rapadou Kréyol (2018) will be followed by an electronically‑infused album to be released internationally by Cumbancha in autumn 2021.

The award-winning duo provide a unique and thrilling blend of traditional American and Celtic folk music and dance, along with original songs and poetry.